Sunny With a Chance of Meatballs

A winter weekend in Key West

Any trip that starts with a view of a colossal fuzzy flamingo riding shotgun in the plane has to be good.

It was mid-January. The holidays were over. The fun was over. The eatfest and presents were over. It was just winter. Boring, cold, long soul sucking winter.

We have found that the best way to cure the winter blues is to simply fly away from them. A quick 4 hours from home, we were flying over turquoise water littered with emerald islands.

It was time for a Key West Quickie!

We only had 3 days, so we didn’t waste a minute dumping our stuff at the lovely Air BNB rental we’d found above the South Pointe Gallery and heading straight for sunshine and libations at the Rum Bar, practically next door.

We were sad to find that Bahama Bob had moved on to Papa’s Pilar Rum Factory on the other side of Old Town, but at least he was still there in spirit.

It was a beautiful day to sip rum on a wide shady porch. One quickly turned to …..more than one..... and before we knew it, it was oyster happy hour!

We had sunset sail reservations so we ducked into the White Tarpon, the closest oyster destination which proudly serves $1.00 oysters all day. Sure, you can get them cheaper during happy hour at other places, but we didn’t have time to wait. And “other places” don’t have the always amazing Key Lime Pie Martini.

On our first trip to Key West many years ago, we booked a cheesy boozy cruise on the Fury Catamaran where we drank cheap champagne in plastic solo cups, danced to the live band, and watched a spectacular sunset. 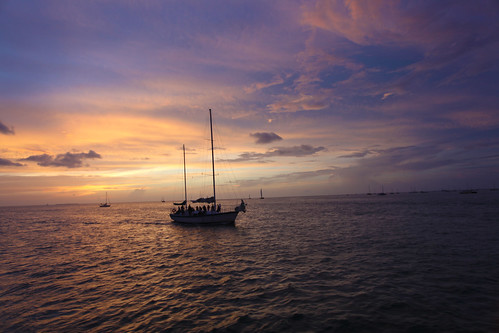 Despite the ultimate cheese factor, we loved it so much we repeated it on later trips and enjoyed it just as much. 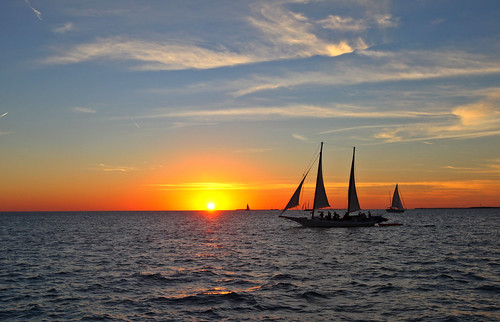 So, once again, we found ourselves getting in line for the sunset sail with the endless beverages and live band, Commotion on the Ocean.

Unfortunately, there is such a thing as “too much of a good thing.” We found that the Fury Catamaran on a night when the weather has turned on you is simply a big boat that smells like deep fried wontons. Despite the lack of charm or sunset, we made the best of it and drank enough bottom shelf booze to make it seem amazing.

Even if we were the only ones not huddled inside eating cheap egg rolls.

Like the Fury Catamaran, Amigo’s following the sunset(less) sail is a tradition that has stuck.

What’s not to love about a place where you eat street corn, tater tots, and a giant bowl of nachos while staring out at the craziness of a Key West Saturday night?

Saturday morning brought a sunrise that looked a lot like the sunset from the night before, but that didn’t stop me from taking a brisk early morning bike ride to the pier to watch the sun not come up.

When I got back, Matt was up and about, so we headed downstairs to La Grignote for breakfast. How could we not? We could smell the freshly baked croissants from our balcony.

Set in a cute little conch house on the corner of Louisa and the quite end of Duval, the entrance to the artisan French bakery was filled with potted flowers and plants spilling over the railings with the maddening smell of freshly baked bread filling the air. We walked in and a bounty of baked goods and pastries waited for us behind a perfectly polished glass display counter. Chalkboard menus overhead boasted breakfast entrees like bacon Belgian waffles topped with whipped cream and a French Petit Dejeuner that came with coffee, toasted artisan bread with homemade jam and butter, and fresh Greek yogurt with berries, orange blossom honey, pistachio and homemade granola.

We were seated at a warmly polished wooden table where Matt had the breakfast special which came with scrambled eggs, their own ground sausage mix, bacon, avocado, tomatoes, and a slice of their freshly baked bread.

Unable to resist the pastry counter, I went for a croissant and baked egg cup with bacon. What is an egg cup, you ask? Why, it’s a little basket of puff pastry with béchamel sauce, crème fraîche and a cracked egg on top.

Or a little cup of happiness, whichever description you prefer.

The croissant was flaky, pillowy perfection slathered with real butter and jam.

From there, we spent a leisurely morning enjoying the streets and shops of Key West.

We spent the morning walking the still quiet streets of Key West, shopping, and enjoying all the things that make Key West unique.

Like this dog in goggles riding in a backpack that said “Spank Me.” .

Or this house covered with teddy bears. Which was less charming than the dog in goggles riding in a backpack that said “Spank Me.”

When I was a kid, I watched too much Twilight Zone and was certain my stuffed animals were going to come alive during the night and kill me while I was asleep. This house was like a giant nightmare. That doll alone was enough to make me sleep with both eyes open. 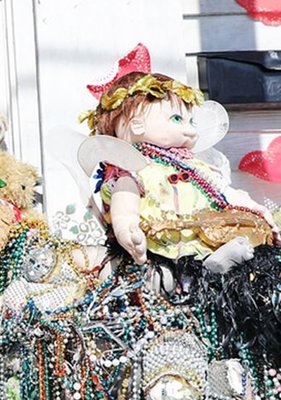 We had afternoon brunch reservations at Hot Tin Roof and I couldn’t have been happier when I walked in and saw a personalized menu, all you can drink mimosa and bloody Mary bar, AND a huge wooden boat filled with BACON.

The brunch at Hot Tin Roof is a thing of beauty. The menu is filled with delightful small plates and you can order as many as you like along with bottomless mimosas, until you explode, pass out, or simply give up in defeat.

While we perused the menu, they brought out chilled seafood and ceviche along with a bacon topped cinnamon roll as big as my head.

They thought they were being clever bringing out that cinnamon roll to fill me up. Obviously, they had never seen me eat.

Oysters on the half shell:

Oh yes, and mimosas….so many mimosas!

After brunch, we headed over to the Hemingway Rum Company to see if we could find Bahama Bob.

We did not find Bob, but we did find this oddly smiley dog.

En route to our end of Duval, Matt was distracted by a “2 for 1 Mojito” sign, so we popped into Willy T’s for a mojito and a little live music on the patio.

While our friends enjoyed some down time, I talked Matt into walking next door to the bar at La Te Da for their Sunday afternoon Tea Dance by assuring him that there would be a “mixed crowd.”

I did not tell him he would be the heterosexual male providing the mix.

Men, women, old, young….it was a colorful crowd dancing to old favorites by the La Te Da pool. Lasting from 4:00 – 6:30, the Tea Dance was situated perfectly between boozy brunch and a proper Sunday night dinner.

After a day filled with mimosas, mojitos, and too much champagne by the La Te Da pool…it was time for some FOOD.

I have heard Key West maven TraceyG talk up Abbondanza’s spaghetti with meatballs to a degree that led me to believe she had to be grossly exaggerating or was getting a % paid for each meatball sold. No meatball could be THAT GOOD. So, I finally had to try them myself.

Dear sweet heavenly sphere of awesome. That little meatball packed more soul and goodness into a square inch than anything that tiny has a right to. It was supernaturally good.

That meatball changed my life.

We all slept in the next morning and decided on a late breakfast at Blue Heaven. Touristy or not, Matt can’t get enough of their banana bread and BLT Bennies. I just like their weirdness and mismatched garage sale coffee cups.

I think my 3rd grade teacher had this cup.

We worked off all the bread and potatoes with long bike ride through Key West’s quiet streets, one of my favorite things to do.

Matt was in need of another oyster fix, so we headed to Pepe’s for oyster happy hour. Pepe's happy hour is my favorite with the breezy patio, house squeezed margaritas, and their own homemade chunky cocktail sauce.

Then it was on to Half Shell for some fish lips, beer steamed shrimp, and smoked fish dip.

It definitely hadn’t been a trip for sunsets, but it didn’t stop us from continuing to try. This was the best we were going to get.

We ended the night with key lime pie and giant glasses of milk.

When your night in Key West ends with a big glass of milk….it’s probably time to go home.

We had planned to leave around noon, but a quick moving snow system thought otherwise. Matt roused us all up at 5:00 a.m. and gave us 30 minutes to get packed. All I could say was, “Thank goodness all we drank last night was milk.”

This is the face of someone roused out of bed at zero dark thirty to leave paradise:

And this is the face of someone who just left paradise and found herself in the snow a few hours later:

Until next time! And where is next time? Why, sunny Guana Cay, of course! Stay warm, friends!