The Cays to Paradise: Boating the Exuma Cays I

The Exumas is an archipelago of 365 cays (pronounced “keys”) scattered along some 130 miles of extraordinary turquoise sea in the family islands of the Bahamas.

These 130 miles of island are sprinkled in the ocean like a glittering necklace. On one side of the cays is the heaving ocean. On the other side is the protected and peaceful Exuma Bank, a shallow paradise of shifting sand, colorful reefs and tiny uninhabited cays with shockingly white beaches and water that looks lit from within.

The Exumas are remote, beautiful and untouched. With only a handful of beach bars and even fewer restaurants , and almost nothing that could rise to the level of “town” for some 100+ miles, it is raw and isolated nature, incredible in its beauty and unmatched in its tranquility, but it’s the water that makes the Exuma Cays the perfect place to bareboat.

It had been 5 years since our last boating trip, having done 2 week long bareboats in the B.V.I. and a 2013 trip in the Exumas. We were itching to see that Exuma water again and knew that doing it by boat was the way to go.

But we don’t sail.

Imagine my delight when I found the sole power catamaran for charter in the Exumas. Before you could say, “Swimming Pigs,” we had convinced 4 friends who had never bareboated to join us on an Exuma adventure with Matt at the helm, armed with nothing more than my 98 page itinerary. 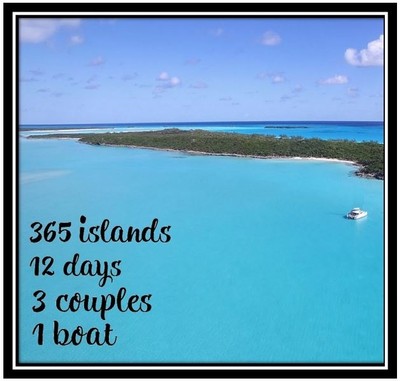 Day 1: It's All About Getting There.

On our previous sail through the Exumas, we had opted for a there-and-back trip out of Georgetown Exuma that lasted 7 days. That trip barely gave us enough time to get to Staniel Cay, some 60 odd miles from Great Exuma. That left over half of the Exumas undiscovered to us. We wanted an opportunity to see the entire chain, so for this trip we chartered a boat out of Nassau for a one way to Georgetown, Great Exuma for 10 days.

Unfortunately, this meant flying into Nassau.

I love the Bahamas. But I hate Nassau.

Ahhh……..Nassau …. the land of Senor Frog’s, drunk 20-somethings, and electric blue, 2 foot tall plastic cocktails. It is a land of cruise ships, three-for-$10 t-shirts, and oversized resorts with midnight buffets.

Thankfully, our time on Nassau was short.

We arrived at midnight and were literally waved through customs and immigration as the agents packed their belongings up to leave for the night.

Day 2: The Waiting is the Hardest Part.

I woke up before Matt and, to kill time, decided to walk down to the hotel’s “beach.” It just made me sad. Having seen so many breathtaking beaches in the Bahamas, to imagine anyone spending their vacation on this “beach” was just wretched. They had no idea what they were missing. 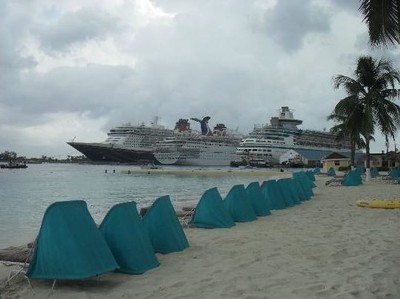 Although it did have a stunning view of the cruise ship port......

As soon as Matt was awake, we wasted no time getting to Palm Cay Marina, where our boat was waiting. While it was still “Nassau” it was a world apart. If I was going to be forced to spend a day on Nassau, this was the place to do it.

Palm Cay Marina is far from….well….pretty much anything else on Nassau. It was a lovely marina, and for $10 we could use the pool, beach, and facilities until our 4:00 boarding time. It was very chic and upscale. They even gave each of us a free rum punch, which we consumed faster than you can say, “May I have another rum punch, please?”

We lounged by the pool and sipped cocktails while we waited for everyone to arrive.

We celebrated everyone’s arrival with a poolside lunch.

And then it was time to board catamaran "Lion of the Sea." Chartered through NavTours, we couldn't have been happier with the boat.

And our very tiny cabins.

With our very large luggage.

Good thing I had that extra cocktail.

Dinner that night was at Palm Cay’s poolside restaurant with plenty of twinkling lights, cocktails, live music, and terrible dancing. 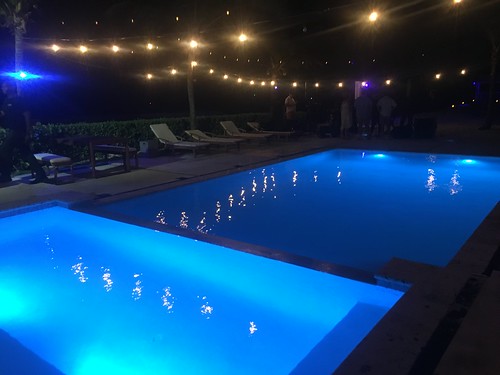 And then everyone crammed themselves into their sardine can bed for our first night on the boat.

As I lay down in my tiny bed, Matt’s giant body taking up 2/3 of the space, I realized that this must be exactly how it feels to be a sardine in a tin- just hotter, tighter and far more uncomfortable. What followed was approximately 7 hours of restless fidgeting, jostling, and shoving with the “accidental” kick thrown in occasionally. Everything but sleep.

Day 3: And awaaaaaay we go!

The next morning we got up as early as we thought reasonable just to get out of that cabin. We admitted to each other how, at least once during the night, we had both felt abject loathing for one another. But in the beautiful glow of our first boat sunrise….

Except, there was no beautiful glow.

We woke up to absolutely miserable weather.

Today was one of our longest legs, as we had to get all the way from Nassau to the very beginning of the Exuma island chain. We had 35 miles to go across open sea. It was our 4 friends’ first day on a boat trip, Matt’s first day ever driving a catamaran, and nature had turned against us.

Not to mention that, even for a seasoned captain, simply navigating in the Exumas is not for the faint of heart. One must use a combination of the boat's chartplotter, Explorer charts, the Cruising Guide to the Bahamas, and several iPads running a variety of navigation apps to pick your way through the shallow water. Add 7 hours of rough open sea and 4 newbies to that equation and it was not looking like an amazing first day.

As the self-designated Galley Wench, I cooked up a “to go” breakfast of egg sandwiches, told everyone to take some Dramamine and “HOLD ON,” and off we went.

The seas were angry that day, my friends.

We had 3 mildly seasick friends and one who literally entered her cabin, died, and never came out. 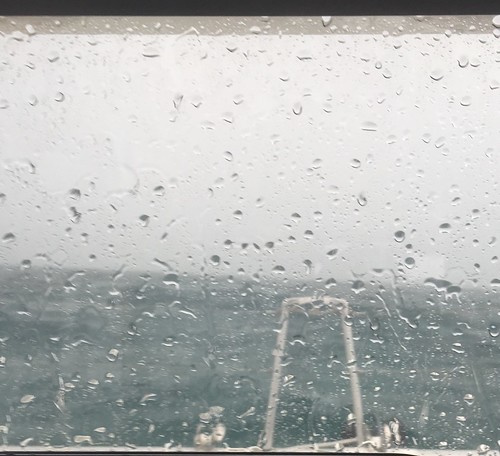 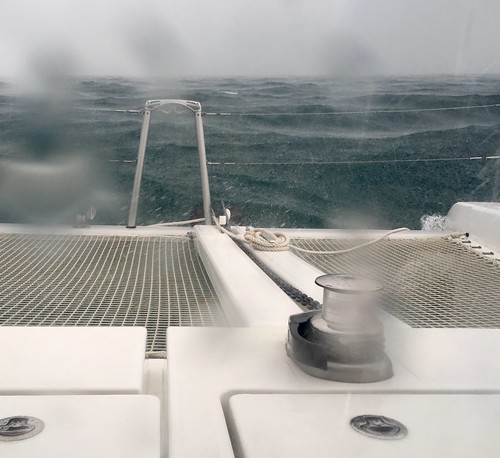 Lunch was en route, so I had to make ham and cheese croissants, a vegetable platter, and cocktails in a wildly rocking galley. I have talents, people.

The day was a tropical hell of rough seas and disappointment.

After a 7+ hour slog through alternating rain and wind, we made it to Highborne Cay. We entered the marina where a glorious slip awaited us as did dinner at their upscale restaurant.

Frankly, it had been a long, miserable day, but the worst was over. We celebrated with arrival cocktails and a little appetizer platter on the boat.

And then it was off to a beautiful dinner at Xuma, Highbourne’s open-air restaurant.

A plate of profiteroles can fix anything.

Very nice! We went to the Exumas and rented a boat and went over to Chat n Chill bar and a private sandbar,it was fun! Did you get a chance to go to Staniel Cay Yacht Club? Great place!

Ryan - we did! Celebrated Matt's birthday there!

Nice! Ask about little pine Cay if you’re heading back by Staniel Cay it’s close to the yacht club!

Thinking of you and your island home. I always enjoy your blogs.