Well, despite all the less-than-pleasant things that happened on this trip to Guana Cay, I still had a good time (for the most part). I do love these little cays that fall alongside the main island of Abaco. They don't quite measure up to the love I have for St. John, but they sure are a nice place to visit when St. John is just a little too far.

What makes the Abaco cays so appealing is the fact that we can fly there in our own plane. We are just too chicken to fly all the way down to St. John. An hour over the water is just about more than I can take at this point, thank you very much. Also, being the out islands, they are very laid back, unpopulated, and natural. While the islands themselves lack the mountainous beauty and lush tropical foilage you can find in the Virgin Islands, the waters of the Bahamian islands are remarkably beautiful. Also, the uniqueness of each settlement (the small "towns" found on each cay) and the friendliness of the local people (not to mention an almost non-existent crime rate) gives it tremendous appeal.

This was my fourth trip to Guana Cay, so it was okay that not every thing went as planned.

We arrived on Saturday, early enough to catch the 1:15 ferry, but the customs guys sort of screwed us out of that one. It took over 2 hours to get through the tiny private airport, for absolutely no reason. The good news is that we had time to stop at Curly Tails Bar and Restaurant, next to the ferry dock, and grab some food and drinks while waiting for the ferry to take us over to Guana Cay from Marsh Harbor, Abaco. 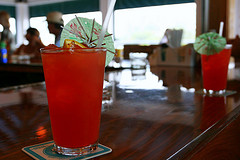 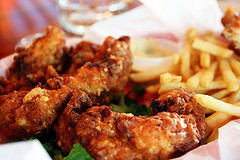 The ferry deposited us at the Guana Cay ferry dock, in Guana Harbor. Guana Cay has a tiny settlement that stretches around a small bay. A bakery (that's closed), drug store, liquor store, post office, grocery, gift shop, produce stand, and the local fig tree that serves as a gathering place are pretty much it. We piled off the ferry and were met by Maria Albury. Troy and Maria run the dive shop, rent boats, check folks into villas, and pretty much help you out with whatever you need. They are great people. She helped us get our golf cart (the mode of transportation on the cay) and we arrived at our beachfront house early enough to take a beach walk before heading out to dinner.

We headed to Grabbers, a casual little place that puts your toes in the sand, a frozen drink in your hand, and points you at the best sunset view on the island. We got there to discover it was Rib Night! Bonus! Steel Daddy was also playing steel drum music. 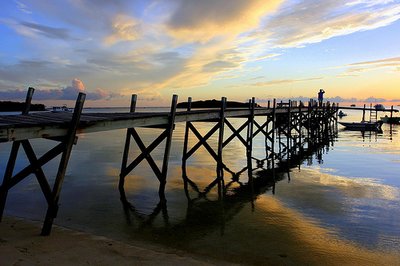 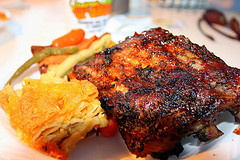 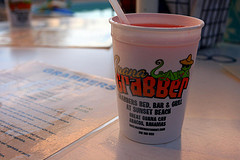 With a frosty Grabber in my hand and a plate piled high with ribs, Bahamian Mac-n-cheese, and veges, I drifted slowly into island time. 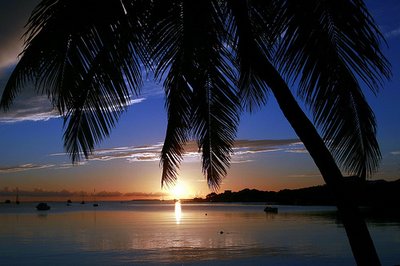 Sunday morning, I woke up early, which I always seem to do on vacation, and took a long walk down the beach. You can walk for miles on this beach without seeing another soul. I love that. I also love that this beach is a wonderful place to find pieces of sea glass, little jewels laying on the sand in blues and greens that have been softly rubbed and rounded by the sea and the salt.

After some down time and breakfast, we headed to Nippers around 10:00 am. Nippers Bar is THE place to be on Sunday. One of the coolest beach bars I have been to, it draws a crowd every Sunday for it's Pig Roast. They come by land and by sea. Nippers is also home to the most lethal frozen drink I have ever had. Looking and tasting like an innocent Icee, this pink concoction will knock you on your butt in 10 seconds flat. One is never enough, but two is too many. It's craziness in a plastic cup. Thanks to the Nipper, this bar gets positively insane on Sunday afternoons.

I wasn't interested in the party, really. Nippers Sunday buffet has some of the best Bahamian food you can get. BBQ roast pork, mac-n-cheese, peas n' rice, bread pudding, tangy cole slaw....the list goes on and on. I had been looking forward to it for weeks. There was also a special bonus: the Barefoot Man concert was today. This only happens once or twice a year and is a BIG event. 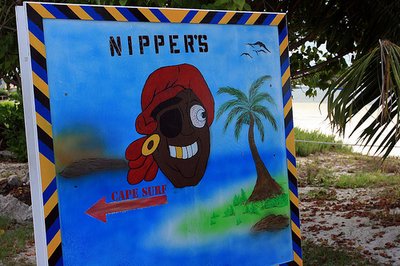 All signs point to Nippers

We arrived early to secure a table. I had pledged to stick to one frozen nipper, having nearly killed myself on a previous trip by drinking too many of the things.....the others in my group, however, quickly lost their minds to the frozen devil. A thunderstorm blew in around 11:00 am and we decided to ride it out at our table, so we didn't lose it. It was insanity. The wind was blowing, lightening was cracking, and water was pouring down our backs. The more it rained, the more they drank. By the time the storm moved on, my travelling companions were done in. 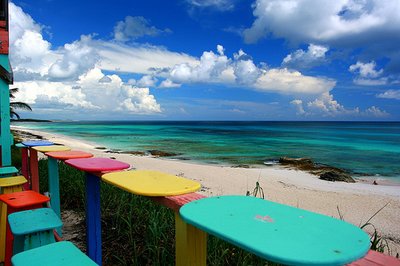 The madness started at that point. People got sick, people got in fights, strangers were dancing on our table, my food tokens got lost, my plate got dumped on the table....it didn't take long before I had enough and took my leave. I didn't get to eat and I didn't get to see the concert. I tried to tell them....the Nipper is madness. 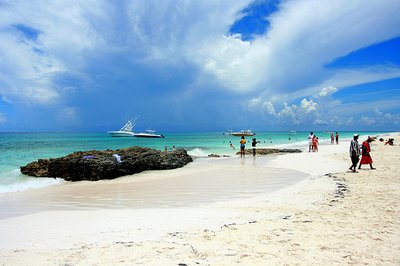 At this point, the day was shot. Everyone made up and we enjoyed the sunset and turned in. 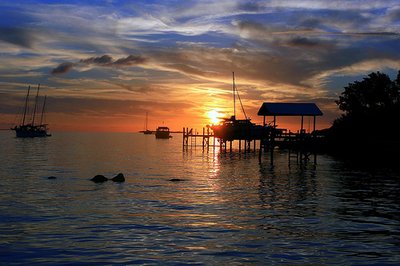 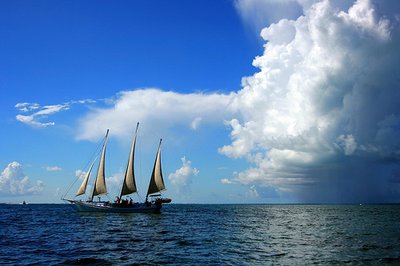 On Monday, we had a rental boat and headed to Man-O-War Cay. Man-O-War is a small cay, only 2.5 miles long and is a very short distance from Guana Cay. It has a beautiful settlement where you can find Albury's Sail Shop, where the ladies no longer make sails, but sew canvas bags and other items on the old sewing machines. 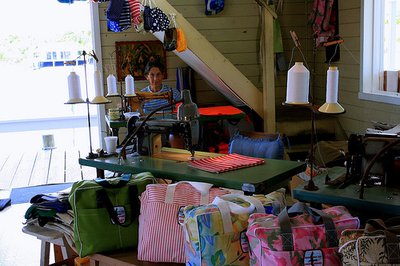 You can also find Miss Lola here. She seems to have a 6th sense that tells her when someone new sets foot on the island and she shows up with her golf cart loaded with fresh baked Bahamian Bread and cinnamon rolls. Her cinnamon rolls are $7, but they are big enough for 6 people and are out of this world. 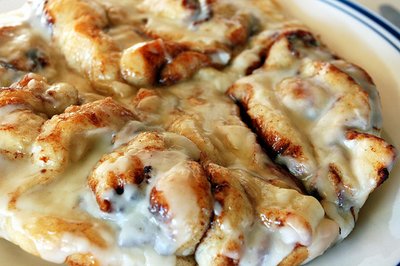 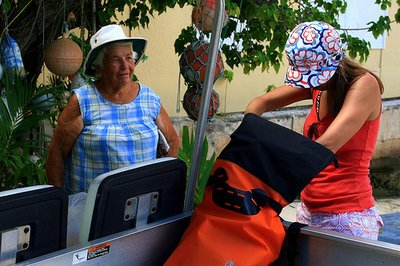 Man-O-War has many beautiful buildings, old boats, and colorful cottages lining it's quaint streets. There are also several beautiful beaches on the island. 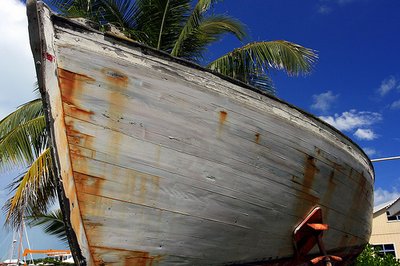 After a stroll around Man-O-War we took the boat over to Fowl Cay Reef, a great snorkeling spot. Entry is pretty tenuous, as you have to weave carefully through reef and rock that is barely hidden below the surface, but the snorkeling is outstanding. 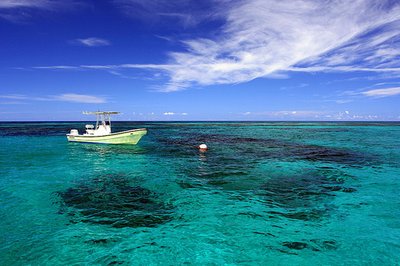 After a pretty full day, we returned to the scene of the previous day's crime for dinner: Nippers. The others stuck to beer this time! Food wasn't the BBQ buffet, but it was still great. 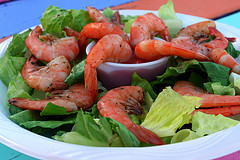 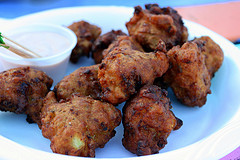 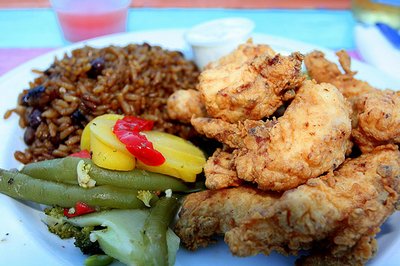 It was my birthday! Since the bakery was closed, I made my own birthday cake. Can you tell? 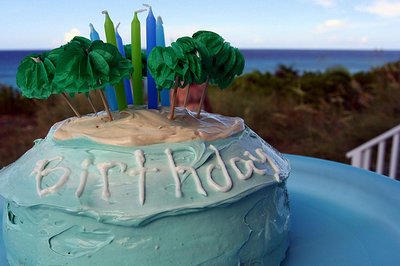 Since it was "my day," I chose to spend the day at the secluded beach that sits on Guana's northern tip. There is no land access, thanks to the blight that is the impending Baker's Bay development, and we always manage to have the entire beach to ourselves. It is one of the most beautiful places on earth, in my opinion. 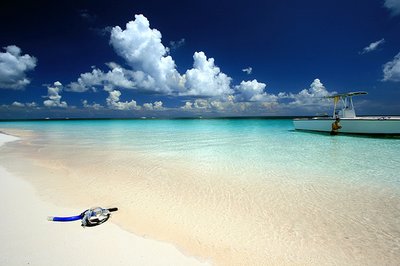 The group went snorkeling and I just stayed in the shallow water by the beach all by my lonesome. I had some Bob Marley playing up on the boat and I just drifted lazily along on a float. It was a small slice of heaven. 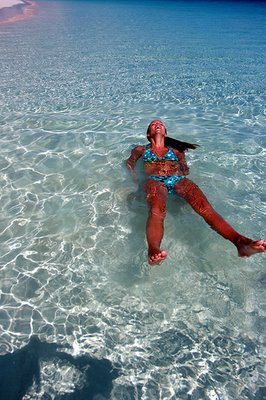 We had a picnic on the boat and headed over to Shell Island. This man made island is the product of some dredging done by Disney to create a channel for their cruise ships (that they abandoned....after making such a mess....). The small dot of land collects an incredible number of shells along its shoreline. A person could walk for hours along the sand, looking at all the special, tiny treasures that the sea has brought. 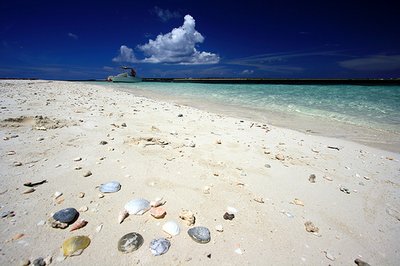 When we were all sufficiently sunned, baked, soaked, and loaded with shells, we headed back to Guana for dinner. 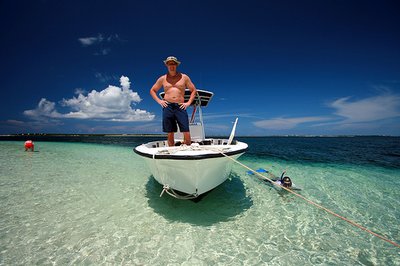 Dinner was at Grabbers again. You have to understand, there are only a few restaurants on the island, so you end up rotating a few! More frozen grabbers, another beautiful sunset, and a fish fry basket was all it took to make me a happy birthday girl. 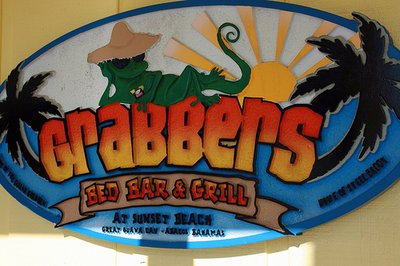 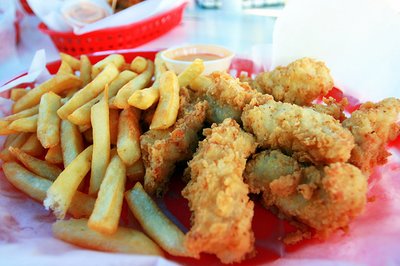 No sooner than we had arrived, it was time to go! It was a short trip, but once you've been a few times, a short trip works. I definitely plan to go back, despite the laundry list of things that went wrong on this trip. However, next time I think I'll try staying on Elbow Cay just to gain a new perspective. With its candy striped lighthouse, Vernon's key lime pies, and ultra tropical Tahiti Beach, I think Elbow Cay might be a great next stop.

Thanks for coming along. 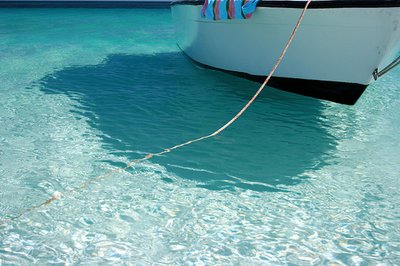 Posted by vicki_h 10:49 Archived in Bahamas