The last time Matt and I tried to attend a Barefoot Man show with John and Teresa, things didn’t go so well. For those who have not read the story, read entry #1 on this blog and you’ll understand….And it wasn’t even on a holiday designed around pub crawls and binge drinking. It was just a Tuesday.

A strong believer in the old adage that “What doesn’t kill us will only make us stronger,” Teresa and I signed on, despite the dire results from our previous attempt to attend a Barefoot Man Concert at Nippers together. 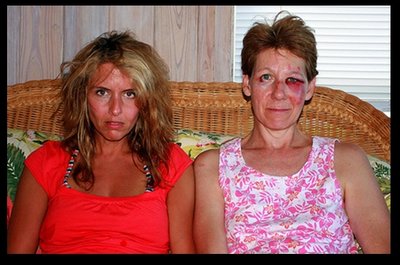 Irish I had a Frozen Nipper! 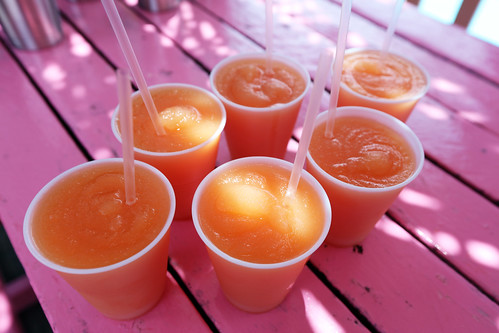 We headed down on Thursday afternoon to ensure we didn’t miss a minute of Friday’s fun. An uneventful flight (the best kind!) got us on Guana Cay in time to settle into Bikini Hut, enjoy $5 Wing Night at Orchid Bay, and relax with a spectacular sunset at Grabbers with a frozen cocktail in hand.

Friday morning found me on the beach early, which seems to be a habit I simply can’t break. My inner alarm clock wakes me before sunset EVERY MORNING on Guana Cay. Knowing it’s only a 2 minute walk to the beach compels me to throw on some cut offs and flip flops and head out the door in the dark every morning. I can’t wait to see the sun come up over that beautiful beach. It’s never the same, and it never disappoints.

It was an overcast day, but we still expected big crowds to descend upon our little island for the Barefoot Man concert, so I was the designated “table holder.” Ensuring we had our choice of table for the day meant going to Nippers at 10:30 and sitting in the sea breeze sucking down bloody marys until everyone else showed up a couple of hours later.

It was a tough job, but I felt fully up to the challenge.

As people poured in, filling up every available seat by 11:30, I was glad I had come early. Not to mention that getting there early meant I got to hear the pre-show warm up, had ample time to visit with the colorful cast and crew of Nippers, and had a chance to get up close and personal with the Big Guy himself.

The downside was that I was already a few drinks in when everyone else arrived.

We were decked out in our St. Paddy’s Day best and we were ready for malarkey and shenanigans.

Obviously, there were plenty of both.

In stark contrast to Barefoot Man 2008, Barefoot Man 2017 was a blast. There were no black eyes, no food fights, and no shouting. No left mad and no one cried.

Based on our 2008 Barefoot Man Experience, I had set some goals for the day:

• Goal #1: Actually see Barefoot Man perform.
• Goal #2: Alternate one glass of water for every frozen Nipper.
• Goal #3: Make it through the day with no one getting in a fight.
• Goal #4: Actually eat my lunch instead of wearing it.
• Goal #5: See to it that Teresa’s hat did not end up some shade of “Nipper” by the end of the day.
• Goal #6: Get home without anyone getting hurt.
• Goal #7: Maintain our dignity.

I am pleased to say that we accomplished Goals #1-6.

Goal 7 is subject to interpretation.

Unlike 2008 where some of us were crying, some sleeping, and some holding cold compresses to their face by the end of the day, we enjoyed a beautiful evening at Sunsetters, eating pizza instead of comparing our battle wounds and looking for band-aids.

As usual, Saturday morning found me on the beach at 0-dark-thirty. And I couldn't have been happier about it.

Matt had some things to work on at the house and on the boat, so Teresa and I planned to kick around Guana for the day.

We started things off with a visit to the Orchid Bay Market, a seasonal event with arts, crafts, and delicious foods.

It coincided with the regular Saturday Sir Eden market, where you can find amazing produce from a local organic and hydroponic farm on Abaco.

After buying enough lettuce for a month’s worth of salads (it was so pretty I couldn’t help myself…besides….on an island where 99% of the offerings are battered and fried, I find myself craving something green!), we decided to head down to the new Mermaids on the Rocks to have a look around.

Guana has a limited number of restaurants, most of them very casual in nature: Grabbers, Nippers, Kidd’s Cove, and Sunsetters at Orchid Bay. We were excited to see the “new kid on the block,” Mermaids on the Rocks, rumored to be a little more upscale with a view to die for. It had opened just the previous week.

Those rumors were spot on.

We found ourselves at a happy, blue building with a bright and colorful bar overlooking the beautiful Sea of Abaco. The views were stellar, the décor was top notch, the wine perfectly chilled, and the pool rules told me someone had a sense of humor.

With a casual pool bar below and an upscale restaurant above, Mermaids seemed to fill a niche that Guana Cay sorely needed. Without hesitation, we made reservations for dinner that night.

With an afternoon to kill, we headed to Grabbers where the guys met us for lunch and some luxurious lounge time. On a pretty day, Grabbers is hard to beat.

And her two best sidekicks.

It was a perfectly lazy afternoon.

We were excited to try Mermaids for dinner. We arrived just before sunset and were immediately in love with the outdoor deck and the view.

One of my favorite things about Mermaids immediately became this sign.

Have no fear…this doesn’t mean you can’t wear flip flops to the restaurant. This means don’t come strolling in the door wearing nothing but a sarong and a bandeau bikini top crushing your upper half into a uniboob. You just have to put some actual clothes on. Resort casual is perfectly fine, provided you’re wearing more than a swimsuit cover up.

While I love running barefoot around Nippers and Grabbers in nothing more than a swimsuit and a tank top, it’s also nice to have a place where the expectations are a little higher. A girl needs a place where she can pull out the cute dress and nice shoes every once in a while.

We enjoyed sunset on the deck with wine and some of their specialty martinis before moving inside for dinner.

The interior of the restaurant was simply lovely. Special thought has been put into every detail, from the beautiful mermaid artwork to the intricate lattice of ropes that separates the two main dining areas. The wood bar gleamed and candles cast a soft and intimate glow at the table.

While I love a good burger and paper plate full of fried things, I was happy to see a menu that offered things like fresh ceviche, spaghetti pomodoro, and several proper steaks, as well as an abundance of fresh seafood options.

My favorite? NO PLASTIC GLASSES!

We had set our expectations high and Mermaids didn’t disappoint.

Sunday morning was clear and beautiful.

We decided to take advantage of the weather and take the boat to Pete’s Pub for the day.

The water views from Guana to Pete's are some of my favorites in all of Abaco.

Pete’s was calm and colorful and we spent the next few hours sipping Bloody Mary’s and Blasters, dining on their fresh fish sandwiches and savory cole slaw, and doing a whole lot of nothing.

We made a few stops on the way back for some snorkeling and beach time.

We were back in time to get cleaned up and head to Grabbers for our nightly sunset ritual.

Then it was over to Kidd’s Cove for the best lobster on Guana. It’s always the most tender and you can’t beat the potato salad. I could eat a vat of that potato salad.

It’s a good thing all I have to do when I am finished is waddle next door to Bikini Hut!

The morning of our last full day hinted that it would be another beautiful island day.

It had been a relatively low-key trip to Guana. Matt had some more work to do, so I spent our last day sunning myself at Grabbers and sipping frozen concoctions.

There was hammock-time, pool floating, lobster bites and cheeseburgers, and plenty of frozen Grabbers.

We made a late afternoon run over to Shell Island before calling it a day.

We decided to have dinner at the house, so I popped by Guana Grocery to pick up a few extra things and found a massive sweet potato. You could make an entire pie with that potato. That potato alone could solve world hunger.

I didn’t buy the potato.

Instead we had a great pasta dinner and the world’s largest salad, using the 9 lbs. of hydroponic salad greens I had bought from Sir Eden for no good reason.

It had been an uncharacteristically calm visit to Guana. I was pleased to know that I could actually visit the island without wrecking a golf cart, getting stuck on a sandbar, having to evacuate a boat on fire, anyone needing stitches, getting cut off by Irene, or running from the Police.

Sometimes I CAN adult.

Stay tuned for my girls' weekend to Nashville .....where I don't adult very well!

Thank you for the great photos and humorous comments. I met George (Barefoot) several years ago in Cayman and had a great time. Glad you survived this trip without a scratch.