It was time to head down the coast toward Oregon, but first....breakfast.

Before leaving Olympic National Park, we decided to do a short hike called the Maple Glade trail. It was stunning.

I am pretty sure the witch that ate Hansel and Gretel lives here. Right here. In this tree.

It was going to take us a little over 3 hours to drive the 150 miles we had to cover to get to our destination for the day: Cannon Beach, OR.

Our drive would take us through prime Goonies country. Those of you who grew up in the 80s will know what I am talking about. If you didn’t grow up in the 80s, I feel sorry for you. The 80s were epic.

Matt was not particularly enthusiastic about the Goonies, but he was pretty excited that our drive would also take us through Washington state’s prime oyster farming territory.

We were cruising through the quaint town of South Bend when he spotted a sign proclaiming South Bend as the “Oyster Capital of the World” followed by a hand painted sign for FRESH OYSTERS.

We immediately pulled over and followed the smell of woodsmoke until we stumbled onto a roadside stand called the Oyster Shack.

Being the planner that I am, I remained dubious. This was not a place I had scouted out in advance. I always consider unplanned stops risky. Unplanned stops are how you get e coli and have your wallet stolen.

Then I reminded myself: this is what a road trip is about. Besides, where else could I see the World’s Largest Oyster? Maybe it wasn’t Jake the Alligator Man, but it was at least as good as the Two Headed Gopher Museum.

The cozy little shack was shucking oysters and grilling them on an open fire. It smelled amazing. Next door were two little girls selling lemonade for $1.

This was West Coast America at her best.

We sat down at a brightly painted wooden table under a tarp and sipped our lemonade.

When #5 was called, Matt took our oyster shell and exchanged it for 3 platters of oyster perfection: 8 freshly shucked raw oysters with nothing but lemon, 4 oysters cooked over the wood fired grill, and a basket of grilled oysters dredging in a light battered topping. 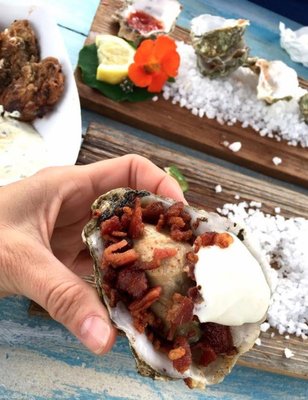 We sampled 2 flavors of the grilled specialties: the Swine Around a Bi-Valve with bacon, cream cheese, and garlic butter; and the Hot Tijuana with fresh cilantro, olive oil, jalepeno, lime, and Tabasco.

I had only recently become a fan of oysters, and these quickly moved to my “best oysters in the universe” list. They would forever be the standard by which all other oysters would be measured.

Oyster snack over, we continued our drive down the coast.

As we crossed an enormous bridge from Washington to Oregon, we passed a sign welcoming us to Astoria.

I silently said, “Heyyyyy you guuuuyyysssss…..” to Astoria as we passed through and kept driving.

To his credit, Matt did ask if I wanted to drive through Astoria and see the Goonies house, even if he was rolling his eyes as he said it.
I took a pass.

I was hoping to get to our final destination in time to do a hike along the Oregon Coast.

We rolled into Cannon Beach in the early afternoon and stopped a fresh seafood market for a quick lunch.
Ercola Seafoods had a seafood counter filled with dungeoness crabs and fresh fish as well as a walk up counter where you could order hot chowder and sandwiches. The thick sliced smoked tuna was to die for.

It was a gorgeous day and we had been cooped up in the car for most of it, so we drove to Ercola State Park to stretch our legs with a short hike.

It was Labor Day, so the park was packed. However, most people chose to lounge on the warm sand at the beach and we found the hiking trail relatively quiet.

The hike was about 3 miles and took us along the coast from Indian Point to Ercola Point. Much of the hike was in deeply shaded forest with the ever present roaring of the ocean only feet away. The trail hugged the coast affording constant views of the ocean below.

I still did not see Bigfoot.

I did see a banana slug.

The Pacific Northwest was teaching me to be happy with what I had rather than wishing for what I didn't.

We finished the hike in the early afternoon, just in time for check-in at our hotel.

I had chosen the Hallmark Resort because the rooms came with an unbeatable view.

Our view was dominated by the iconic Haystack Rock. Which was in the Goonies. And that is important. Since we didn’t have time to squeeze in a visit to Astoria.

These coastal beaches were so different than what I was accustomed to. Even though it was a holiday weekend in summer, the beaches weren’t covered up in people with suntan oil and kids with beach balls. The beaches were vast, empty, windswept stretches of sand. Even during the warmth of the day, there was a brisk chill to the air.

In the evening, it turned downright cold and a layer of fog began to settle over the ocean. Wind and wave battered rocks jutted out of the water like mammoth beasts.

We grabbed some jackets and a blanket and settled in with some wine to watch the sunset. I still didn’t see a colorful sunset, but I did finally find Bigfoot.

Apparently, I was channeling my inner Bigfoot when Matt snapped this photo. The resemblance is uncanny. (Note to self: file this in the "When bad photos happen to good people" file)

If you can’t FIND Bigfoot, BE Bigfoot.

When Matt started giving me the “If you take one more picture….” face, I decided it was time for dinner.

Unfortunately, all of our top picks for dinner were closed for the holiday (what’s up with that???) so we ended up at the Pelican Brewing Company located across the street from our hotel. What they lacked in unique atmosphere or creative menu options they made up for with a tower of giant onion rings.

A lot can be forgiven in the face of a giant tower of onion rings.

Some great shots here. Ecola state park is beautiful.
I was amused by the tsunami warning signs, as well as the signs warnings about how "beach logs" in the water can kill you, plus the shark warning signs = all a little bit different than the signs at the Jersey Shore...