Just before Olympic National Park, we passed the Humptulips River and into the town of Humptulips proper. Apparently, it wasn’t bad enough to name one thing Humptulips.

Because two Humptulips are obviously better than one.

It was at the Humptulips grocery that I found this little gem.

When I was 7 years old, I saw an episode of “In Search Of” about Bigfoot. All it took was the calm, rational voice of Leonard Nemoy telling me, “A giant hairy creature, part ape, part man. Indians call him Sasquatch. They believe he is as gentle as he is powerful and mysterious. He’s been seen many times in the rugged mountains and deep woods of the Pacific Northwest,” to make me a believer.

When Dr. Spock tells you something, you listen.

And then there were those eyewitnesses. Their passion and conviction was very convincing.

“I seen something up in the woods and I thought it was either a dawg or a bear or something you know just by the way it was movin, an then I got to lookin at it and it was uh ever bit a six foot tall and uh anyhow I got to lookin at it and I kept thinkin Well dang, you know, it was awful tall to be behind that bush and still be able to see it. It were 7 foot tall or better. It purt near smelled like a wet dawg and none of my dawgs had been in the creek or nuthin like ‘at. I ain’t sayin’ it was a Bigfoot, but I'm purty sure it was a Bigfoot.”

How could my 7 year old self NOT believe in Bigfoot after compelling and heartfelt testimony like that?

So, naturally, when I realized we’d be doing some hiking in the Pacific Northwest, I immediately thought we might see Bigfoot. Sightings always seem to be reported by crazy rednecks, so I figured Matt and I had a good shot.

Humptulips confirmed that I had officially entered Sasquatch country.

I was ready to see Bigfoot.

But first, it was time to get to our cabin and get settled in.

With limited lodging options, I was instantly thankful that I had opted for a small cabin located on Lake Quinault instead of a lodge room at the historic park lodge. I wasn’t ready for another lodge room.

The cozy 1920’s cabin was a welcome respite after our day of travel.

We took in the lake views, relaxed by the fire, and cleaned up in a shower that did not require the use of special sanitary shoes before heading to the Lake Quinault Lodge for dinner.

Sure, it was typical park lodge food, but the setting was beautiful, the wine was plentiful, and the views of the lake were majestic.

We ended the day at the cabin, listening to the sounds of the fire crackling in the fireplace.

After breakfast by the fire, I packed us a trail lunch and we headed out for the day.

Our destination of the day was the Hoh Rainforest visitor center, about an hour and a half away, but our first stop was at Beach 4 near the Kalaloch Lodge on the coast. I wanted to do some tidepooling.

Apparently, at low tide, the beaches of the Pacific Northwest become microcosms of the ocean, miniature sea-stacks filled with oceanic wonders, barnacle flanked rocks, and stranded starfish and sea anemones. As the ocean recedes, the ocean habitat becomes visible for a brief period of time, allowing visitors to see what is normally hidden beneath the blue-gray waves.

I forgot all about Bigfoot as I hopped from rock to rock, staring at giant ruby and tangerine colored seastars and bright green anemones. The more I looked, the more I saw.

The beach itself was an experience worth savoring: it was huge and gray with mossy covered boulders, giant driftwood, interesting rock formations, and pebbles as smooth and colorful as marbles.

I could have stayed all day…….if I hadn’t slipped on a giant pile of slick snails and submerged my sneakers in water that smelled like a day-old fish.

I needed dry shoes and we still had an hour drive to get to the Hoh Rainforest where we would be doing a 10 mile hike. We needed to get moving.

The Hoh Rainforest is massive. The trail that runs along the Hoh River is just over 32 miles long. We had decided to do the first five miles, stopping at was aptly named “Five Mile Island,” to have lunch before heading back.

Maybe Bigfoot isn’t real, but I went into the forest armed with pockets filled with beef jerky just in case, because, according to the commercials, Bigfoot likes beef jerky.

I was ready to find Bigfoot.

And this looked like the perfect place to spot him.

The Hoh Rainforest was otherworldly. You could easily picture Bigfoot behind every giant fern or mossy draped tree. Or a dinosaur. Everything was so BIG. We felt so small. Like we had accidentally stepped into some kind of prehistoric world that man was never meant to see.

At the five mile mark we indeed found ourselves at Five Mile Island, where we spread our blanket on the banks of the river for a sun soaked lunch siesta.

I kept an eye out for Bigfoot the entire 5 miles back to the trailhead, but I never saw him. I’m pretty sure it’s because I was carrying my good camera.

I realized too late that he only shows up when all you have is one of those homemade cameras that you make out of a shoebox and a pinhole.

That would explain a lot.

So, I hiked 10 miles in the deep Pacific Northwest wilderness and I did not see Bigfoot. I’m pretty sure it’s a hoax. I just ended up with tired feet and pockets that smelled like beef jerky.

The drive back to our cabin was an hour and a half and it was already late in the day. We decided to stop at Ruby Beach for sunset and then head to dinner at the Kalaloch Lodge before going back to the cabin for the night.

I had seen photos of the epic sunsets at Ruby Beach.

This was my vision: 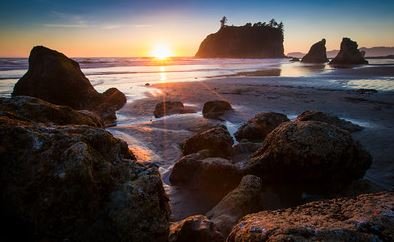 This was my reality:

The Pacific Northwest was constantly reminding me to leave my expectations at the door and simply enjoy what was before me.

Okay, maybe the beach wasn’t bathed in golden light, with the sky painted in shades of crimson and purple, but there was a beauty all the same.

We bundled up against the chill, grabbed our blanket, our plastic wine glasses, and our CANS of Oregon wine (you gotta’ love a state that cans wine) and settled in for sunset.

Because dining options were quite limited in this remote neck of the woods, we stopped at the nearby Kalaloch Lodge for dinner before continuing the drive back to the cabin.

For the third night in a row, we found ourselves faced with typical national park lodge food…..but they had tater tots covered with cheese and BBQ pork. If that isn’t a southern fried pile of white trash goodness, then I don’t know what is. Maybe I hadn’t seen Bigfoot and my sunset was a little grayer than I had hoped, but I had TATER TOTS, people.

We drove the hour back through the park in COMPLETE AND UTTER DARK.

I kept an eye out the window….you know….just in case….

Seriously, does it get any better than that??

Nice! Agreed - the Hoh Rainforest is mind blowing. The highest biomass per acre on the planet. Slugs 6 inches long. Ferns 6 feet wide. Colonnades of trees growing out of "a nurse log". Regarding the food - one question: no Dungeness crab? I have a photo somewhere of us eating one one of the local monsters at a picnic table in the rainforest...maybe your travels woes prevented a stop where you could've picked one of those things up, near the Dungeness spit or in Port Townsend.

Funny how it looks like you had a brighter day in the forest when clouds and drizzle could've been easier to shoot in terms of balancing the lighting exposures...