When I was a kid, we didn’t take a lot of vacations. We didn’t have a lot of money for travel, and there were 3 kids in the family, so when we did head somewhere, flying was out of the question. “Vacation” meant loading up the car with suitcases, a large brown paper bag of sandwiches, and some 8 track tapes.

Sure, we spent as much time getting there as we did actually enjoying our vacation destination, but I remember that time in the car as much as I remember where we went. Maybe more. My brothers and I would sit in the back of the brown Buick and play “I spy” out the windows and eat Little Debbies while Mom and Dad listened to Herb Alpert and the Tijuana Brass. We would fight over who had to sit in the middle, with their feet on the “hump,” because mini-vans and cushy SUVs with DVD players were not part of our 1977 reality. We ate scattered, smothered, and covered hash browns and pecan waffles at Waffle House and stayed in mom and pop motels along the way. We talked and laughed for hours on the road. We fell asleep in the floorboard with the sound of the road beneath us.

As an adult, Matt and I don’t have the luxury of time, and “vacation” means picking a location and getting there as quickly as possible so we can start enjoying our destination.

Like us, the time of road trips has come and gone for many people. Most people would prefer to hop on a plane and get to their destination in a few hours, instead of wasting days in a car.

We’ve lost the beauty of driving down the beaten path, stopping at the small towns along the way, and finding what secrets they have to offer.

With modern travel and busier lives, the simple pleasures of the road trip have been left behind for some of us. But should they? Maybe it’s good for the soul to slow down and take the road less travelled once in a while.

That’s why Matt and I decided to road trip our last vacation.

We have both wanted to see the Pacific Northwest and what better way to do it than by driving Highway 101 from Seattle to northern California?

The easy part was deciding on a road trip. The hard part was choosing an itinerary. That area of the country is packed with so much to see.

Should we just focus on the big national parks? What about the coastal islands? Do we go north to Vancouver or south toward California? Should we make it an urban trip and visit the big cities of Seattle, Portland, and San Francisco or go small and try to see things like the world’s largest frying pan and Jake the Alligator Man? There were so many options my head was spinning.

After much deliberation, we decided to focus on hiking and parks, because that’s our thing. We would start in Seattle and end our trip in Napa Valley, spending the last few days recovering from all the hiking by drinking copious amounts of wine in the golden sunshine.

Even with the trip we chose, we could only make so many stops. There were too many things to see and not enough time to see them all. I can hear you now, “You mean you didn’t stop at the Tillamook Cheese Factory??? Are you insane?” Despite my insatiable love for all things cheese and my almost overwhelming desire to have my photo taken next to a giant fiberglass cow, we simply did not have time for the cheese factory and some other hundred stops that would have been awesome.

We had to choose what we thought would be our “best of the best” and the rest would have to wait for another trip.

The itinerary was set. 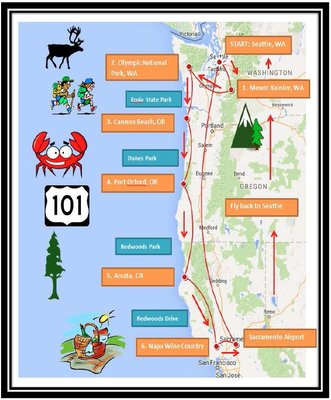 We’d start in Seattle and head to Mount Rainier National Park. From there, we’d head west to Olympic National Park. Next, we planned to drive south along Highway 101 with stops along the Oregon coast until we ended up in northern California, where we would leave the coast and head for the sundrenched hills of Napa Valley.

The trip was epic. It was one of those trips where every single moment buzzed with life and beauty and gratefulness. The view, the company, the weather, the world — it was all magnificent.

Want to go on a road trip?