We woke to a heavy rain. Our first glimpse of the Amalfi Coast in the daylight showed dark skies, a pounding sea, and fierce winds. We decided to head to breakfast and see what things looked like after we’d filled up on pastries and cheese.

The hotel had a very nice breakfast buffet, similar to the one we had at Hotel Santa Maria. There were sliced meats and cheeses, breads and pastries, cheesecake (oh yeah!), spreads, cereals, yogurt, fruit and juices. Really, who can’t fall in love with a country that serves cheesecake as a breakfast food? Again, the coffee had to be ordered, but I felt pretty sure I could handle it. 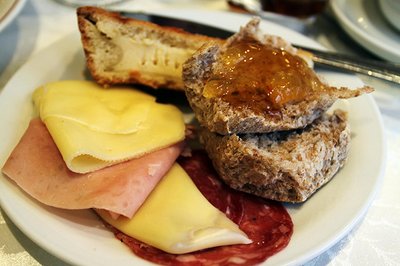 “Un cappuccino, per favore,” I told the waiter when he came by. He nodded. “Grazie,” I replied.

See? I was getting the hang of it.

I have to mention the Italian cappuccino here. To me, it was a thing of true beauty. You see, I love strong coffee. I make my coffee so strong that my office staff has forbidden me to use the communal coffee maker, insisting that I keep a private one in my office, likening my coffee to a “hot milkshake, it’s so thick.” I don’t like black coffee either. I like it strong with lots of cream and sugar. That is just what an Italian cappuccino delivers. A deliciously strong, fabulously hot cup with the perfect amount of milk and foam and always served with sugar. Perfection. Like Matt with the Nutella, I was developing an unhealthy addiction.

By the time breakfast was over, the wind was so bad the rain was literally blowing sideways! We chose to read for a while in hopes that the rain would slack off. After a few hours, the growing pizza monster in my belly was starting to grumble, wondering where the lunchtime cheese, wine, and bread-fest was, and the rain had stopped, so we decided to be brave and venture out into the ridiculous wind. 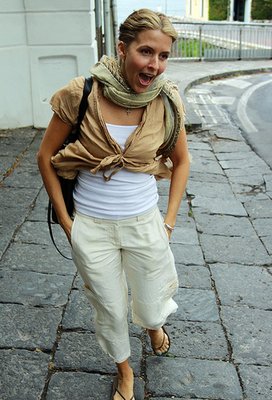 We walked the short distance to Sorrento center in gale force winds. It was CRAZY, but worth it. As we rounded a bend in the road, we saw the Lattari Mountains rising up behind the thin strip of coastline that was dotted with cliff hugging villas that looked as though they could simply slip into the Tyrrhenian Sea with one more gust of the wind. Sorrento sat, framed between mountain and sea, a little city filled with open air markets, beautifully crumbling buildings, and explosions of color that came in the form of climbing vines and flower boxes. 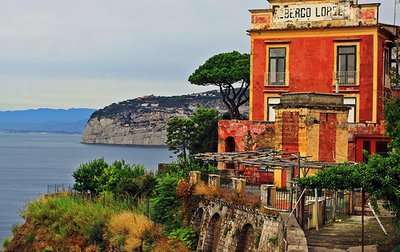 We did some walking and shopping with the wind whipping us at every corner. The weather didn’t detract from the loveliness of Sorrento, however. My favorite thing was becoming the small markets that seemed to exist on every corner. Italian markets are wonderful. Tiny little things that are overflowing with bins of fresh fruits and vegetables outside and hung with salty meats and savory cheeses inside. Shelves of fresh baked breads and rolls wrapped simply in paper or not at all filled the air with warm yeasty smells and strings of peppers and garlic dangled from the ceilings. 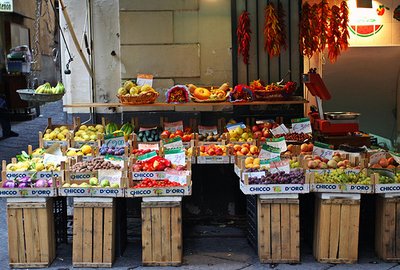 When the rain started back up, we decided lunch was in order. We popped into La Lanterna, a cozy and delightful restaurant and ordered what was now our usual: A carafe of the house red wine. We followed the wine with a pizza margherita. The crust was thin and crispy and it was topped with fresh mozzarella, basil, and tomatoes. After the pizza, I had a ravioli caprese, which was basically a thick and creamy tomato sauce loaded with cheese, and Matt had the lasagna which was phenomenal. 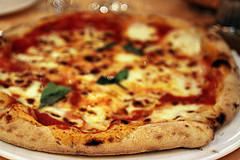 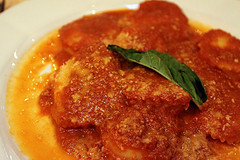 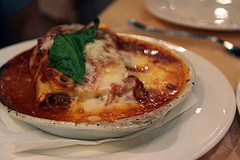 After lunch, we walked around Sorrento for a while longer, Matt popping into a pastry shop to try out a chocolate filled cannoli. The wind was still ferocious, so we decided to head back to the hotel for a little down time. 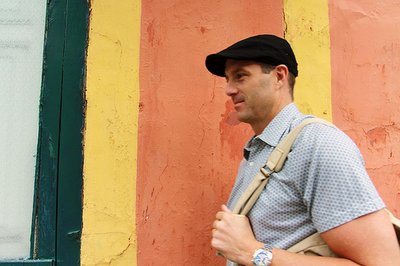 That evening we decided to drive back to the little town of Piano di Sorrento to do a little shopping. We grabbed a bag of grapes from a market and snacked while we walked. The little town was alive with activity. People were everywhere, drinking at outdoor tables, wandering down the cobbled streets with shopping bags, or buzzing by on scooters. 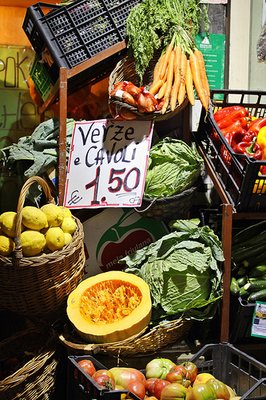 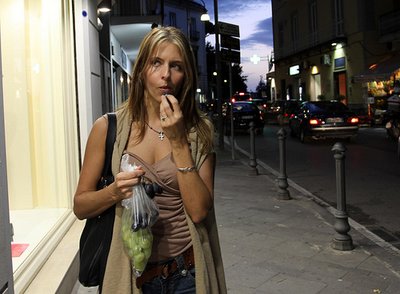 We had driven there and as usual, found that parking was a supreme challenge. We had parked in what was obviously a legal spot but there were some signs we couldn’t read so we had just hoped for the best. Well…the best was not meant to be. We returned to our car to find a parking ticket. In Italian. Apparently the spot we chose had a little pay box down the street that we hadn’t seen. Um…because it was in Italian.

Matt: “Just throw it away. What can they do?” he says as he crumples it up and shoves it in the glove box.

We agreed to ask the hotel what to do the next morning. I kept it in my purse because I knew Matt would try to throw it away when I wasn’t looking. I was convinced trying to leave Italy without paying our parking ticket would set off an alarm at the airport and an army of military guys with machine guns would come take us out of the boarding line, revoke our passports, and throw us in an Italian jail. Okay, maybe that’s extreme, but I like to follow the rules.

We returned to the hotel and cleaned up for dinner. We decided to stick close to “home” and chose Ristorante Moonlight, a very homespun little place just down the street. We walked to the restaurant and when we arrived, entered into a beautiful little garden. It was still cool and drizzly, so we were taken inside and seated. We were given a plate of fried bread puffs (think little doughnut holes with no sugar) and bruschetta. We ordered a bottle of house wine and a pizza diavolo (pizza with hot sausage). 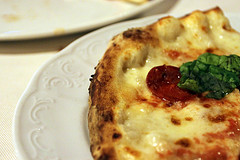 It was my personal goal to sample as many pizzas as I could on this trip.

For dinner, I ordered a tuna salad because all the bread and cheese were making me crave something green. Matt ordered “Shrimp Scampi.” 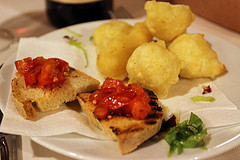 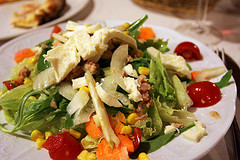 What comes to mind when you think “Shrimp Scampi?” Probably something like this, right? 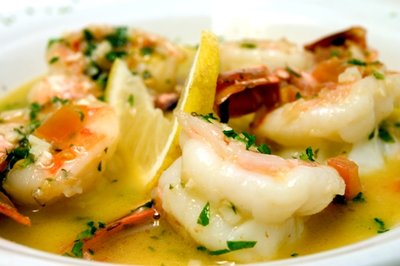 You know, peeled shrimp in a delicate butter and garlic sauce…maybe a little parsley sprinkled on top…..

What Matt got was this: 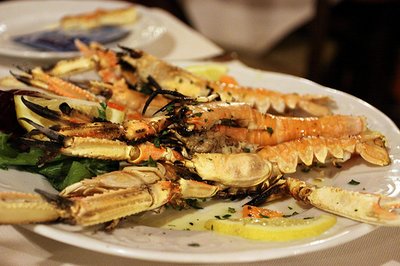 “What the hell are these?” he whispered.

“I don’t know,” I said, “Crawfish? Baby lobsters? Sea monkeys? I have no idea, just eat them.”

We were beginning to learn that English translations on Italian menus required a tad of interpretation. The English word they used for something might not actually mean what we thought it meant.

The good news is that they were super tasty…..just not what was expected. I still am not certain what those little guys were. Crawfish, I think. They tasted more like lobster than shrimp.

We followed dinner with a couple of drinks at the hotel bar which we took outside and enjoyed on the patio that overlooked the sea. The wind and rain had given us a reprieve, and we thought maybe the storms of the day were over.

Late that night, terrible storms blew through. We heard trees shaking, shutters banging, and glass breaking. When the worst had passed, I fell asleep and dreamt of sea monkeys and hurricanes. 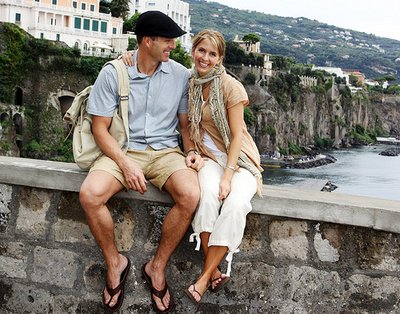 Another really good installment, here is my silly q..you order pizza as an appetizer in Italy?

Not necessarily an appetizer, they just have multiple courses and it always seemed to come out before the other food. Pizza is good as any course in my book!

it makes me want to eat pizza really bad........we do not have pizza here that looks that good.